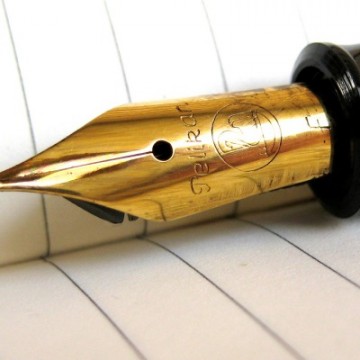 Yesterday I received two handwritten missives in my mail, both written in cursive. One was from my doctor, explaining the results of recent routine blood tests and wishing me a pleasant weekend. The other, a brief and lovely message from a friend who recently visited, thanking me for a pleasant time.

And not too long ago, I had a lively conversation with a stranger on the bus who happened to notice I was doing some editing with a fountain pen. He allowed that he loved writing with fountain pens, in fact collected them. I was sorry when we came to his stop.

Personal experience aside— it seems to me that resistance to abandoning the teaching of cursive handwriting is growing.

Some teachers say that in this technological era, being able to write in cursive is an unnecessary skill.  What kids are going to need in the future is skill in keyboarding, and they don’t have time to spend on teaching both handwriting and keyboarding. That’s the good reason they give for their opposition. I suspect the real reason is that the better kids are at keyboarding, the better they will do on the tests that are mandated by the common core. In some school districts, children as young as eight years old have to be able to drag and drop and type answers on a keyboard so that they can take tests mandated by the core—tests that as far as I can see benefit no one except the those involved in the test industry. Certainly they don’t benefit the third grader who has squirmed and struggled answering questions that are widely seen as too difficult.

Another real reason is that many teachers themselves do not write in cursive and so feel unable to teach it.

Unfortunately proponents do not put forth very strong arguments. One of their favorites is that if kids can’t read cursive, they won’t be able to read our founding documents. Who in the world reads founding documents in the original copperplate? Have you ever? Neither have I; neither have those making this argument. If that were the primary reason kids need to learn to write cursive, proponents of teaching it would lose hands down.

The strongest arguments for teaching of cursive comes from neurological research. And these are powerful arguments. Pity they are not advanced more often.