Skip to content
FIRST CUP OF COFFEE
After the sun was up and my coffee drunk, I checked my favorite blogs. Alas, the country is going to hell, just like yesterday and the day before. In California a man shouting, “F——Trump!” tried to stab a Republican candidate with a switch blade. He failed because he had a defective knife. (No details about what was wrong with the knife.) And I read that the New York Times has hired a woman who fantasizes about killing all white men, and says she thinks President Trump is Hitler.

I feel like I’ve wandered into an Alice in Wonderland Humpty Dumpty world where words mean whatever the speaker wants them to mean.

But even in the midst of all this upside-down-ness, there are still times when I feel it’s absolute bliss to be alive. It’s not the same “bliss” I knew in my ignorant, vigorous youth, but it’s still bliss. Is that okay? Or have we reached the point where a prudent man must conceal his happiness in order not to agitate a swarm of resentful, depressed ANTIFAs, all insisting on universal misery in the name of social justice and emotional equality?

The following poem isn’t as well known as it should be. 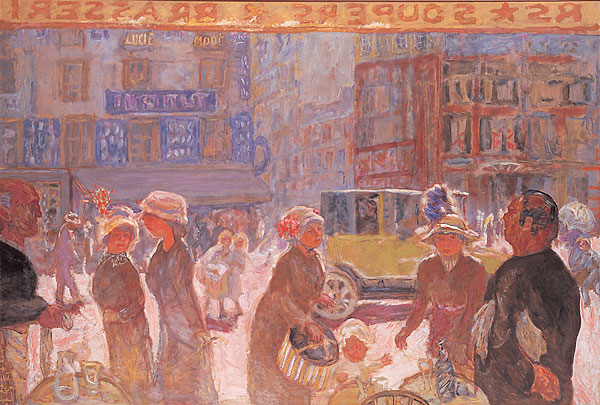 You are sitting on the terrace of the Brasserie Wepler. (It is still there, I understand.) Your waiter is at right. He has brought you your breakfast. You are sitting under the awning that runs across the top of the frame and can see portions of empty tables in front of you. You are watching two little girls trying to cross the street. The painting is called Place Clichy and is by Pierre Bonnard.