Iona Opie died on Oct. 23 at the age of 94. You probably never heard of her, but in 1971, she and her husband, Peter, helped determine how Mary and I spent the next few years of our lives. 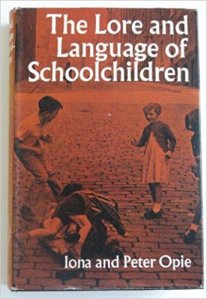 We had taken a sabbatical leave from our teaching jobs and were enrolled in a folklore class at Indiana University. There we read The Lore and Language of Schoolchildren, written by the Opies in which they collected and classified the traditional folklore of children—rhymes and games and jeers and jokes, etc. They were British, so of course they collected the lore of British children.

We decided to do something similar for American children’s folklore. We’d get to hang around playgrounds and interview lots of children. Sounded like fun. Our professor thought it was a good idea. For him the important thing about the project was the fact that apparently nobody else had done it. Like the Opies, we were not academic folklorists (we were English majors) so at this point what we intended to do was simply a class project in which we would collect and classify children’s folklore from as many children as we could.

However, as our work progressed, we were surprised to discover how important this

children’s oral tradition was to their emotional and social development. So—instead of just recording and classifying their lore, we began to take our work more seriously. We decided to write a book organized around the many ways children’s folklore helped children learn lessons and skills they needed to make their way in life. One Potato, Two Potato was published by WW. Norton in 1976.

We were critical of the way schools and parents then took charge of children’s playtime and squelched their ability to play and learn on their own. Now—39 years later, we have even more reason to complain. Informal neighborhood play groups composed of children of different ages face extinction. Whatever free time a child has is taken up with organized sports, music lessons, karate, you name it. Parents are afraid to let their children out of their sight. And there seems to be more homework, more pressure to excel at academics. Some schools have even dispensed with recess!

Incidentally, our book was well received and is still in print after 39 years, which must be some kind of record. You can read more about it here.

One thought on “RIP, Iona Opie”