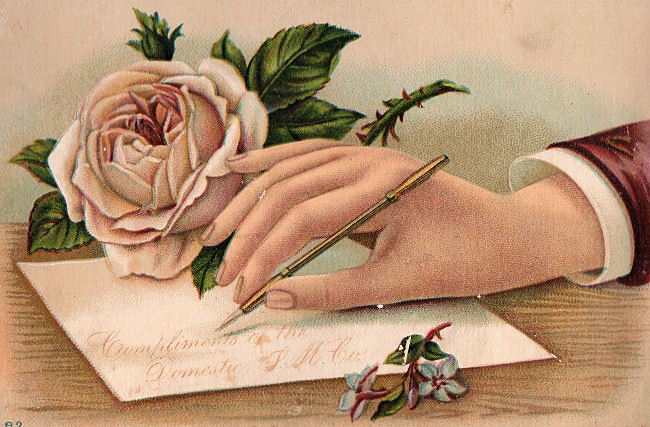 Over the holidays we had occasion to spend a couple of nights in a hotel, something we hadn’t done for awhile.

Of course we were not at all surprised to find the huge TV, the little ihome clock radio, the microwave, the refrigerator, the coffee maker, the iron , the ironing board, the hair dryer, the illuminated magnifying mirror (I could have done without that), and various lotions, gels, soap, and shampoo. And a note left on the vanity informed us that the management would be happy to supply a toothbrush, or comb if we had forgotten to pack those items. The safe in the closet, I’ll admit, was a bit of a surprise.

I wondered if there might still be a Gideon Bible hidden somewhere. I opened the drawer of the night stand and sure enough! There it was. Since it was almost Christmas, I read the Christmas story as told by Matthew. That was nice.

However even with this superfluity of amenities, there was something missing—NO STATIONERY! And we know why, don’t we? Because nobody writes handwritten notes or letters any more.

I decided to ask Google about hotel stationery. (Google knows everything.) It seems that while many hotels have stopped offering it, some— mostly high end— hotels still do. In fact there is a luxury hotel in California where complimentary stationery is embossed with the guest’s name! Actually, I think that’s a bit much.

I realize that just because the hotel offers stationery does’t mean that guests use it. Nevertheless, the fact that high end hotels still provide it seems to support a notion I have had for awhile.  That is, that the handwritten note is becoming a status marker. High end parents who want their children to appear refined and well educated may see to it that their children write thank you notes by hand. They may even insist that the kids learn to write a cursive hand, even if they have to hire a tutor. Privileged children then may learn a skill that used to be taught to all children, thus increasing the social divide. This would not be progress. mlk

7 thoughts on “The Missing Amenity”